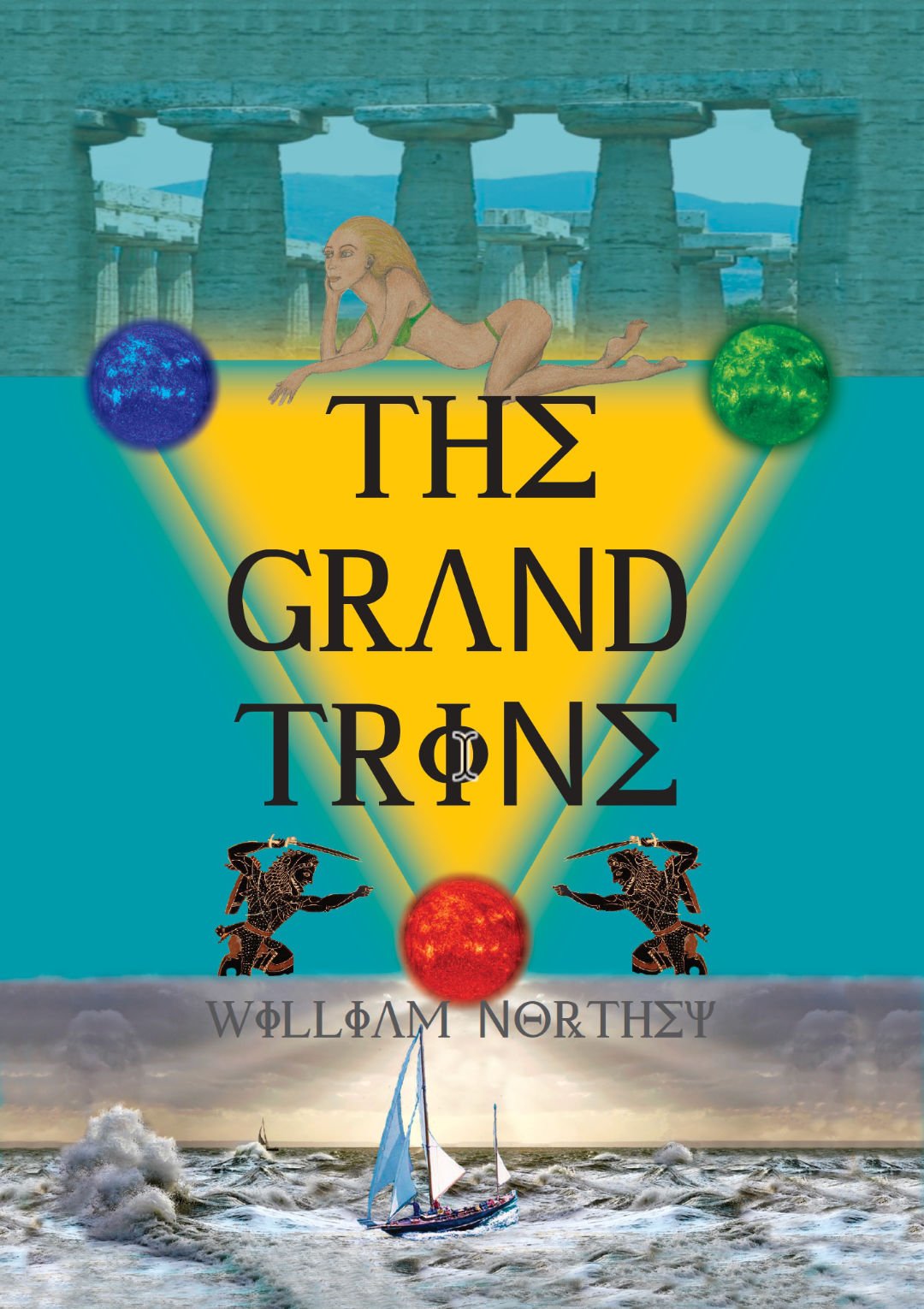 Step into William Northey’s world of fantasy in The Grand Trine – A Common World Trilogy. Book 1 begins the journey to the Grand Trine.

He missed the harsh reality of lessons in the Culture Colonies – the seven replicas of ancient cities built on his father’s private island in the Sargasso Sea. George ached for the reenactments, for immersion in his role of sandal maker, or lute player, or scribe in the royal court of the Egyptian Colony. He pined for the stink and sweat of raising pigs in the Asian Colony, for the salty tang of prósphatos cheese in the Grecian Colony.

But now, all that has changed.

Aaron Flowers, his billionaire father, has designed George’s latest lesson as nothing more than academic memorizations from Plato’s Republic. Worse, his best friend hints that the parties and pranks for their eighteenth birthday will be different. “Prepare for the ultimate surprise,” Glen whispers, and then alludes to the hidden, even sinister motives behind George’s unusual upbringing.

Of course, George doesn’t know that his father has invited strangers to Flowers Island.

One to inflict a terrible lesson, the other to enchant.

Both propel him toward the Grand Trine.

Buy The Grand Trine at Amazon

In The Grand Triumph by William Northey, George Flowers is sitting alone overlooking a beautiful vista. Longing to return to his native world, George hears, or thinks he hears, a distant, strangely familiar melody.

The Tranquility of Solitude

by William Northey | The Grand Trine

In the harsh reality of Jiri’s Flowers’ world, finding a functioning piano is its own form of Grand Triumph. Here is a piece Vermont author, William Northey can imagine Jiri playing to soothe an aching soul.

by William Northey | The Grand Trine

“Creativity is the essential response to grief.” —Henry Seiden, Ph.D.

I didn’t stumble across the above quote until years later, but it describes my reaction to losing the love of my life at age twenty-nine. She and I had known each other for years, lived together, then bought a home; had planned a forever future.

Too bad forever never lasts as long as we hope.

Though, I will admit. Despite the tears, the regret, the months of mourning, the endless lament of “what could have been” – there is a happy ending to this story.

But it won’t arrive for over two decades.

Books 2 & 3 in A Common World Trilogy

After escaping the manipulation of Flowers Island, shipwrecked on the Outer Banks, George confronts the authoritarian world of the mainland and finds himself immersed in a deadly global conspiracy.

Hunted by covert forces determined to destroy him, he struggles to understand the powers unleashed by his unconventional upbringing on Flowers Island. Forces that challenge the very nature of reality. A reality where music and imagination combine to become portals to a multi-verse of limitless energy, and the key to saving a billion lives.

As likely, grand delusions from a mind warped by Aaron Flowers, George’s father. Years of subliminal programming, archaic drugs, mind training exercises during lessons in the artificial worlds of the Culture Colonies – all were designed to blur the distinction between fantasy and reality.

Each could offer a plausible explanation for the waking dreams now invading George’s life.

Against such influences, can George battle his way to Grand Trinity University? Join the Grand Trine? Find his place in The Greater World of the Common Man?

Or will Illusion triumph?

Buy The Grand Triumph at Amazon

Three years of study with Coach Willis Buffington at Grand Trinity University has secured George’s position as quarterback of the Grand Trine. He’s happy and living with Cerissa. Thanks to Plastical Imagination, the byproduct of his training on Flowers Island, George can now wield the awesome power of electromagnetic fluid.

But George is also the United Nation’s most wanted terrorist.

By “gifting” humanity with the lethal Recal-DNA, he bears responsibility for billions of deaths.

As a result, Coach Buffington imposes limitations on George’s use of electromagnetic fluid. He warns about even greater dangers. Counsels George to develop emotional maturity before using his power beyond the safe confines of Trinity Stadium.

Too late. George has already abused the fluid.

Weather anomalies ravage the Northeast Kingdom. The electromagnetic shield protecting the Kingdom has broken down. The university is under attack. Two men claiming to be George’s “guardians” have appeared. They’re not human.

Advice, cautions, and ultimatums fall away, leaving only consequences.

Consequences that will stretch from Earth to the constellation Triangulum.

Buy The Grand Triangulum at Amazon
{

“A fascinating and inventive first novel.”
—Joseph A. Citro

“In over twenty years as a literary editor, I found only three manuscripts compelling enough to read in one sitting.  The Grand Trine was one of them” —Ed Whalen

– author of Pioneers of Forest and City

Join My Free Newsletter for news about local appearances, special offers and a free download of "A Triad of Fables", three crazy short stories.

This website uses cookies to improve your experience while you navigate through the website. Out of these, the cookies that are categorized as necessary are stored on your browser as they are essential for the working of basic functionalities of the website. We also use third-party cookies that help us analyze and understand how you use this website. These cookies will be stored in your browser only with your consent. You also have the option to opt-out of these cookies. But opting out of some of these cookies may affect your browsing experience.
Necessary Always Enabled
Necessary cookies are absolutely essential for the website to function properly. This category only includes cookies that ensures basic functionalities and security features of the website. These cookies do not store any personal information.
Non-necessary
Any cookies that may not be particularly necessary for the website to function and is used specifically to collect user personal data via analytics, ads, other embedded contents are termed as non-necessary cookies. It is mandatory to procure user consent prior to running these cookies on your website.
SAVE & ACCEPT